Guido Richard Zeller was born in the village of St. Galen, Switzerland. In 1961, he immigrated to the United States and settled in the small town of Walnut, Illinois. There he began working as a route driver at the Walnut Cheese factory where his brother Albert was employed. The Walnut Cheese Company produced a variety of cheeses which they distributed to pizzerias, restaurants, delicatessens and grocery stores. In 1966, brother Albert purchased Lardano’s Italian restaurant on Main Street in Peoria, adjacent to Bradley University. Soon after, the name was changed to Avanti’s, which means “forward” in Italian. After the success of Avanti’s near Bradley’s campus, Guido and Albert decided to open an Avanti’s on the west edge of ISU’s campus. 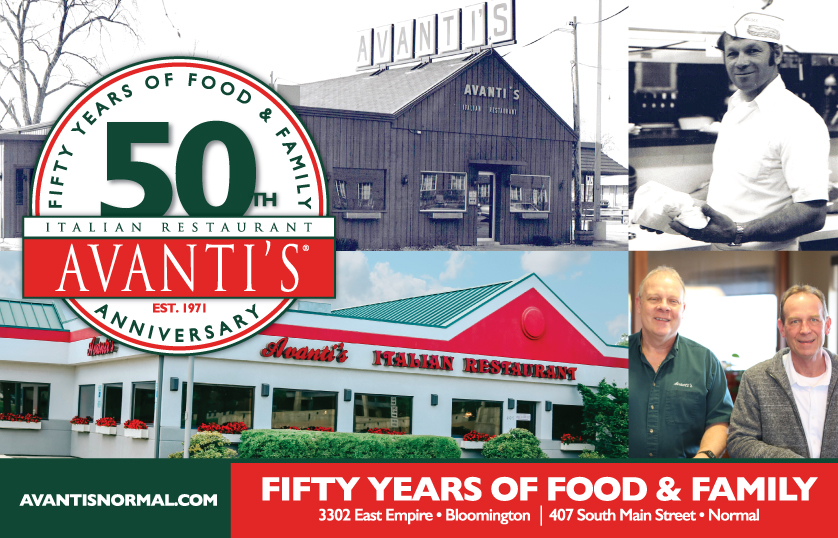 Avanti's Italian Restaurant was established in Normal, Illinois in June of 1971. Originally, the restaurant was jointly owned and managed by Guido and Albert. In 1973, Guido bought his brother’s share and became the sole proprietor. Guido's brother Leo joined the operation in 1976 and became an integral part of the business. Guido, successful owner, manager, and friend to the community, passed away in 2002. Today, Guido's two sons, Marcus and Richard, are involved in the ownership and management of Avanti’s. In June of 2009, the brothers opened a Bloomington location at 3302 East Empire. Albert retired in 2018, and his son Stefan became majority owner and President/CEO of the five Avanti’s Italian Restaurants in Peoria/East Peoria/Pekin, Illinois.

Guido, with his wife Anna, lived in Normal and raised four children: Marcus, Richard, Maria, and Judy. They are all involved in the business and live in the area. Guido became a U.S. citizen in the late 70's. He was very proud of his dual citizenship and attributed much of his success to the opportunities available to him in the United States. Guido generously supported his Catholic faith through Epiphany Church and School. Epiphany Elementary named their playground “Guido’s Grounds.” Avanti’s continues Guido’s generous tradition of giving back to the community. Special Olympics, the Baby Fold, the American Cancer Society and ISU Scholarships Foundation are just a few of the many charitable organizations Avanti’s supports. Avanti’s partners with many local schools and churches in fundraising throughout the year with sales of its signature bread and Gondola™ sandwich. Participants and fans at charity golf, run/walk and similar fundraiser activities look for familiar Avanti’s products.

Our restaurant cooks and serves home style pasta, pizza, and sandwiches that are available through dine-in, carry-out, delivery and our banquet room. Avanti’s trademark, however, is the wonderful, fresh Italian bread which is prepared and baked in our restaurant kitchen. We have long been an institution for Illinois State University students and faculty. Returning ISU students and staff, as well as Normal residents who have moved away, often choose Avanti’s as the place they want to eat and bring their friends and family.

Our staff and management are experienced professionals who understand how to prepare and serve steaming hot, delicious Italian meals and fresh bread in a clean and comfortable atmosphere. Avanti’s Italian Restaurant provides a very rare combination of homelike surroundings and high quality food.

Our company has developed a reputation for consistent, non-complicated dining through years of attention to detail of our operations. We never compromise on the quality of raw food we select or take shortcuts in food preparation. Personal and friendly service to every guest who enters the door is a priority, and will continue to be a priority, at Avanti’s.